Here is a loong overdue update for my ongoing selfportrait project. The idea is to transfer myself into the wild west and create a game-ready character.
The selfportrait part helps me to get better at anatomy. My mirror-face is the best reference and everytime I look into the mirror I notice something I didn't before.
I'am going to show more of the body next week, so stay tuned.
Currently I'am  blocking out everything that will be part of the final character to make sure it all works together well. 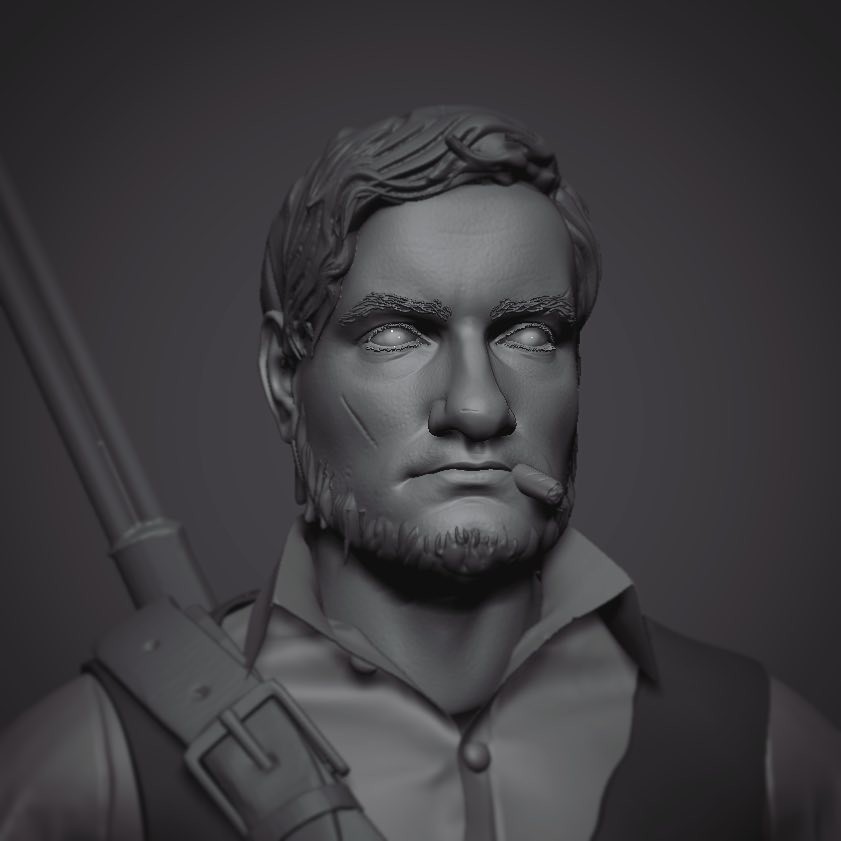 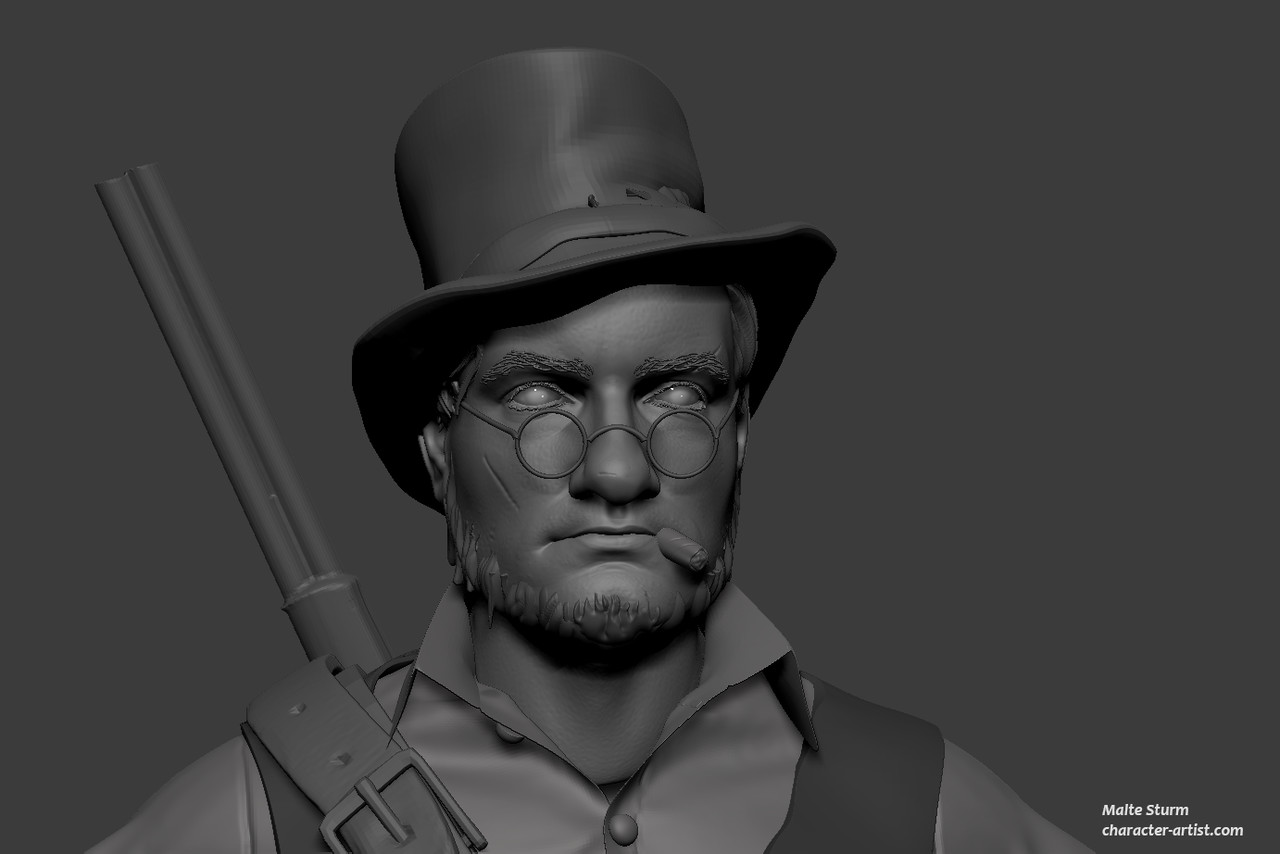 Post might be changed and updated as I progress. The following are my unsorted thoughts...kind of my personal project diary.
If you enjoyed reading, feel free to give feedback! :)

I had this idea in my head for some time now: myself as a game character in a setting I really enjoy -  reflecting my love for games, art and historic settings. It also would serve the purpose of proving to potential employers that I am capable of creating game characters.

Since I did a lot of facial anatomy studying this year, I decided it is the right time to start what I call my "If I was born in..." Project.

I will recreate myself as a game character in any setting I love - as if I was born in that world and had lived there for some time. That could be GoT, HDR, Witcher...whatever.  First up though: Western setting. With the upcoming Red Dead Redemption 2 release I have so much excitement in me regarding western themed things that I just can't resist haha :D
Another thing that this project approach could be benefitial to: Company tailored Applications. I think it could be cool to have myself as a game char set within the world of a game developed by the company I gonna apply for. But thats all still far away and a lot of work, so lets not make too many plans before I even finished one version of my alter-ego. I might just stop after one char. But that would be alright too. I just like to have a bigger idea for things :)

SO, let's finally get into the first work then!

Here is a small roadmap for myself:

- First thing to achieve is to nail the selfportrait obviously. Since the head is the most important part of a character, I want to achieve the best result I am currently capable of. Also, I want it to be the part that went through the most iterations. The current head you see below went through quite a few iterations already. I noticed that my observation and evaluation skills improved a alot and my actual sculpting skills always have to catch up. When I open the sculpt from a few weeks ago, I thinks its a total disaster...but back then I thought its quite okay :D

For that reason, I will probably finish the head last. 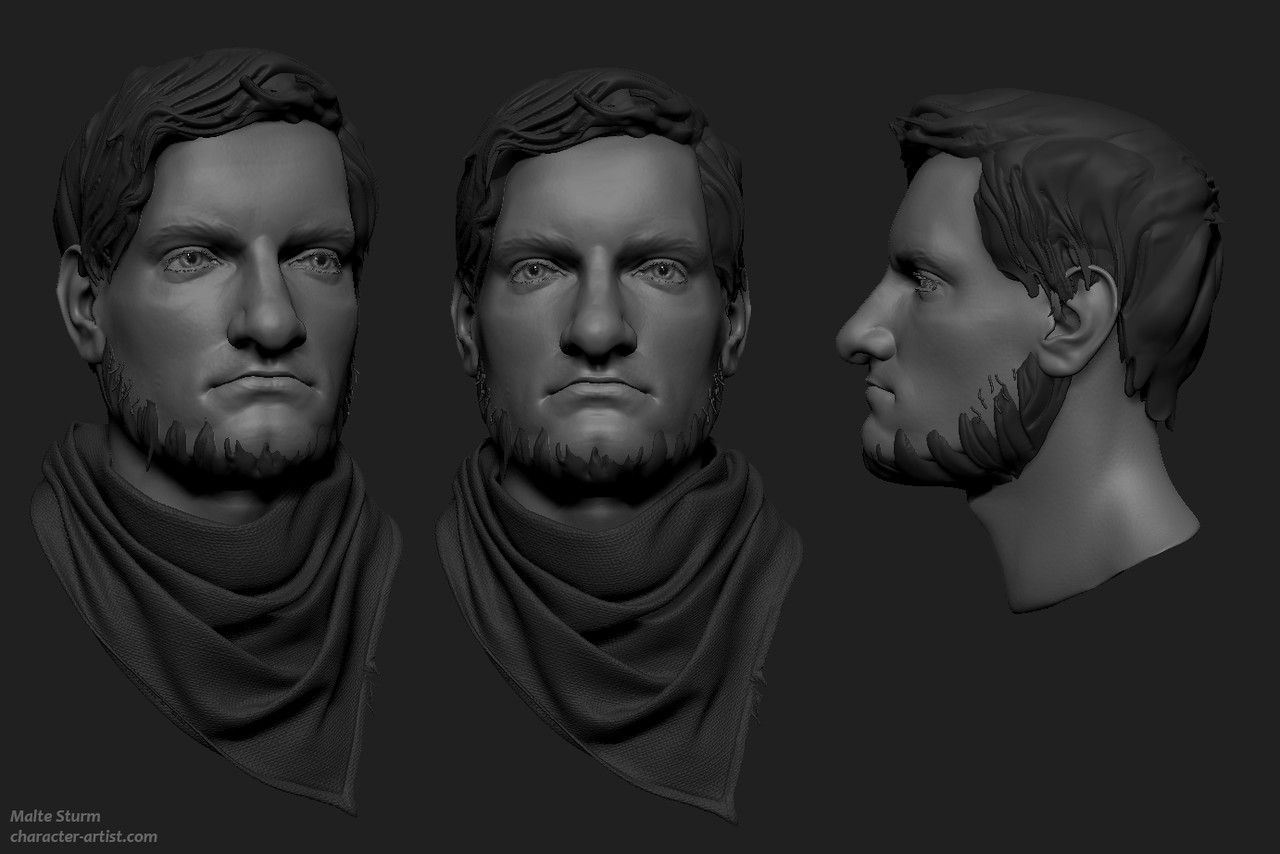 Pretty wip obviously, but a start. 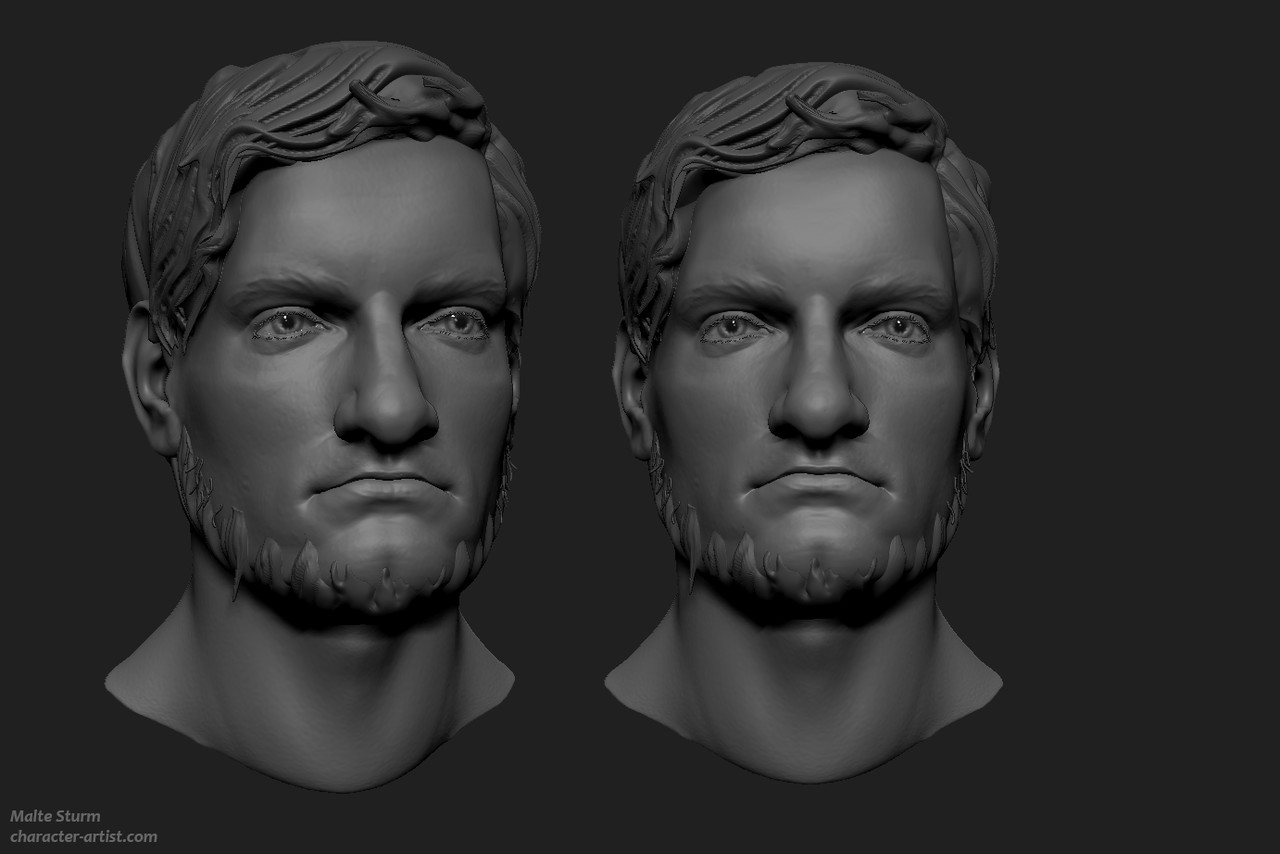 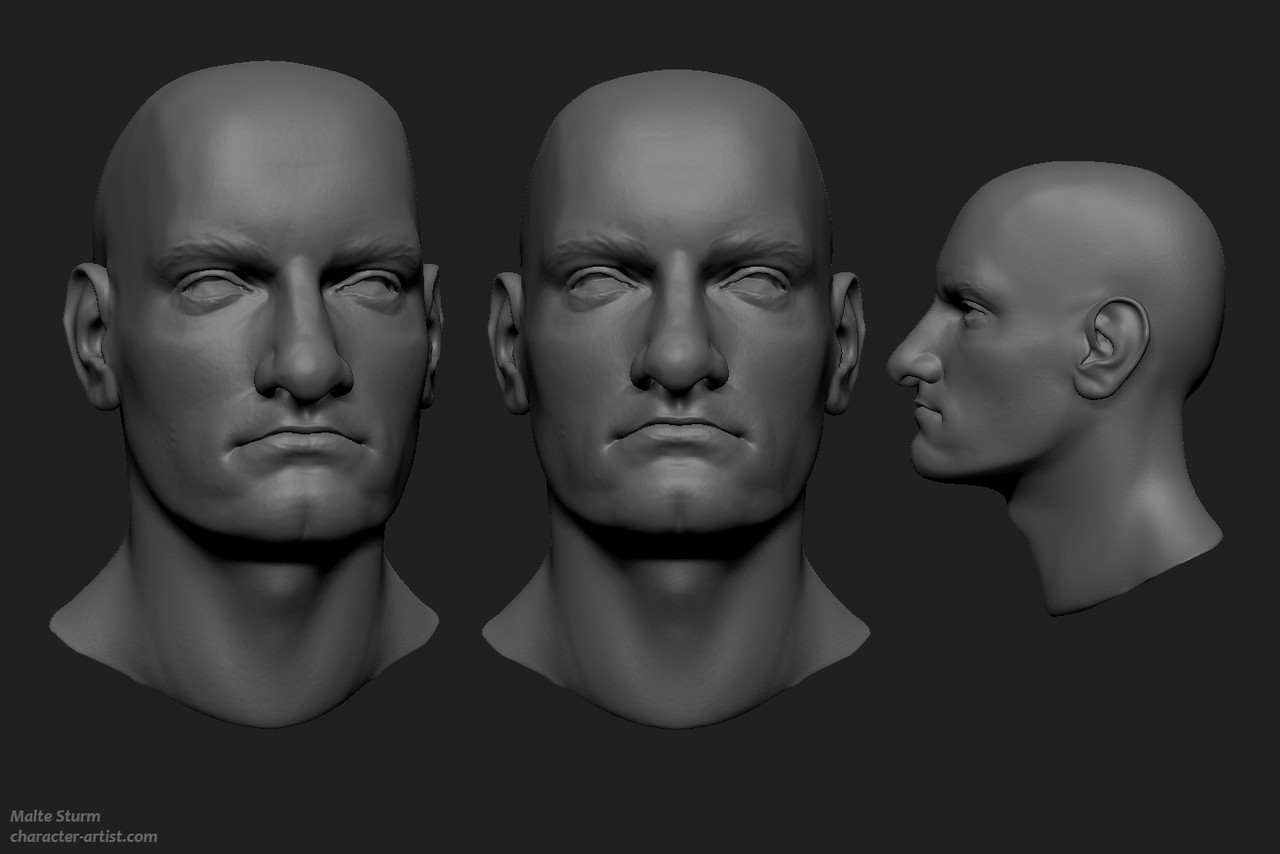 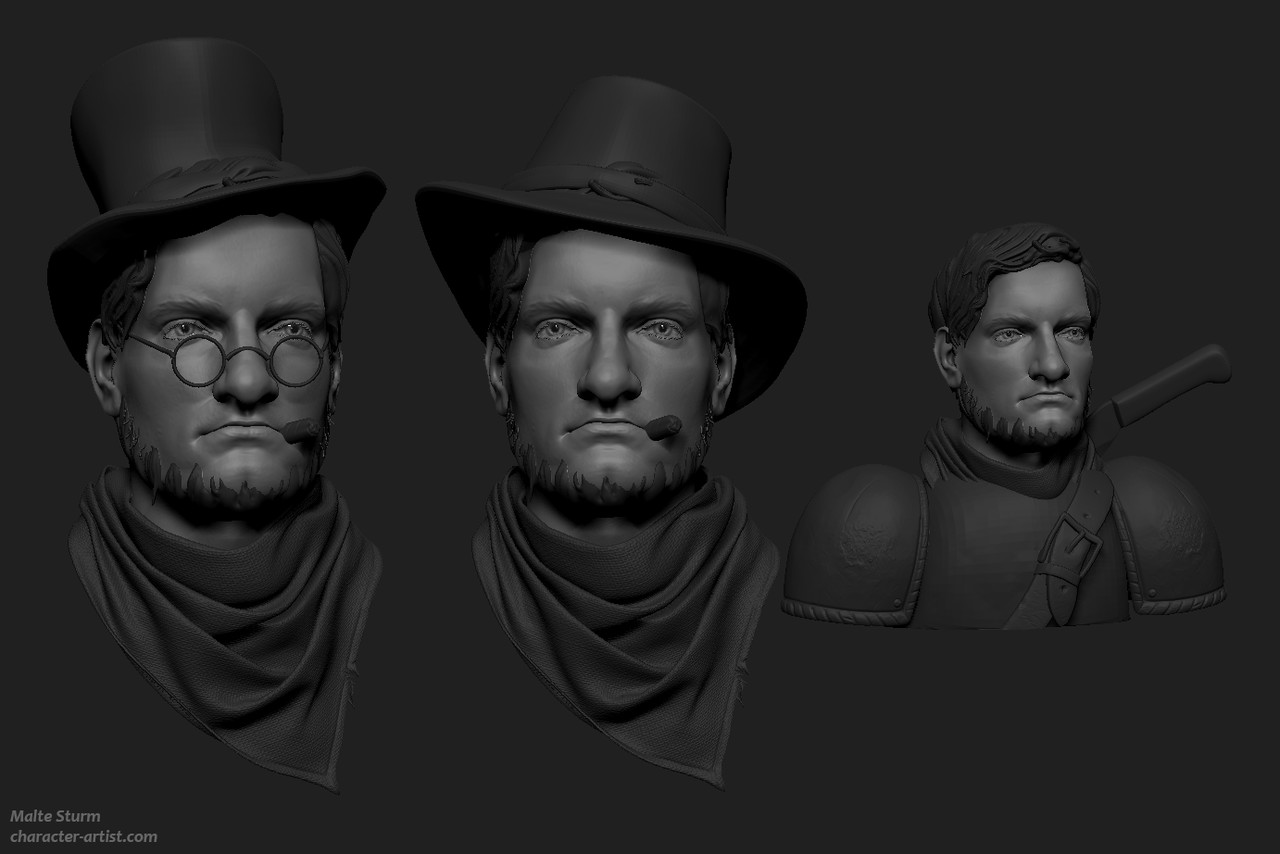 a few variations with sample assets to get a feeling for the possibilities...and its just damn fun to do too :D

Might base the hands on my previous hand study to save time. We will see...

Another goal for this project was and is to use more Marvelous Designer.
I already did some first steps, but gonna dive deeper into it during this project. First results can be seen above (scarf).